The Getty’s blockbuster Pacific Standard Time initiative, which fueled a region-wide collaboration of over 60 cultural institutions in 2011 and 2012 to examine Southern California’s impact on art history, was such a resounding success that the masterminds at the Getty have a sequel in the works.

The Getty has begun to dole out grants to institutions in Los Angeles and gather artworks from Latin America for their groundbreaking sequel, Pacific Standard Time: LA/LA. In September 2017, PST: LA/LA will enlist the help of cultural institutions from San Diego to Santa Barbara to present 46 exhibitions and events that will explore the artistic connections between Latin America and Los Angeles, Latin America to the rest of the world, and the Latin American diaspora.

As a Southern California Mexicana, all of this is of particular interest to me. When I heard that The Getty would be hosting a special screening of recent Video and Performance artworks from Latin America, I reserved my seat immediately. Organizers Glenn Phillips and Elena Shtromberg presented the screenings, and treated the audience to a bit of behind-the-scenes information.

While sifting through over 800 video submissions to be included in PST: LA/LA, Phillips and Shtromberg realized so many of the works were so strong that there was no reason to wait until 2017 to screen them to the public. Thus, seventeen video works were selected, primarily from Central America, Colombia, Peru, and Ecuador, for our viewing pleasure, in a series of screenings that will continue leading up to the opening of PST: LA/LA. Here are my three favorite video artworks from the event: 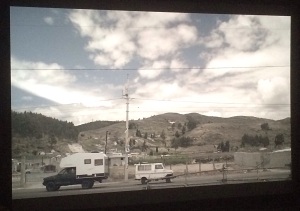 This work stars a 1977 Andino Miura, the first vehicle to be designed and manufactured in Ecuador, and the last model to be produced. Balseca films the Andino Miura’s difficult yet visually stunning trip through 272 miles of Ecuadorian landscapes, the stout white vehicle huffing, puffing, and sometimes even being dragged along the way by helpful strangers with towing capabilities. Yet, why the struggling vehicle is making this journey is not clear until the end, 16 minutes later, when it finally pulls up in front of the Cuenca Museo Municipal de Arte Moderno and parks, triumphantly. The Andino Miura’s endurance test itself is the work of art, a metaphor for the artist’s journey that was finally recognized and awarded in the form of an invitation to participate in the city’s 12th Cuenca Biennale. 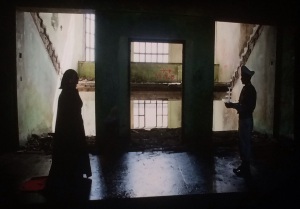 This video takes place in the broken down, sea-side Peruvian Leoncio Prado Military Academy, amidst the once-grand officers’ quarters. Short, still shots seem like perfectly arranged photographs as they flash across the screen, yet they radiate a subtle movement that can only come from film. Two mysterious characters, a woman in a red gown, and a young man in military garb, manage to speak volumes without ever opening their mouths. Then, suddenly, seamlessly, photographs are subbed for the still shots, as an even more sinister reimagination of Yoko Ono’s seminal 1964 performance artwork, Cut Piece, takes place. Heavy with symbolism, in Orders are Orders, every shot, still or moving, is worthy of framing and analysis of content.

In an inner courtyard of what appears to be a Peruvian home with whitewashed walls, there are two square piles of Yves Klein’s iconic, patented blue pigment. A young, fit man walks into frame, steps one foot into each of the piles of blue, and then somersaults towards the wall, slapping his feet onto the wall, leaving behind two blue footprints. He simply walks out of the room, and the shot fades to black. This short yet amusing video cleverly plays on French artist Yves Klein’s idea of a “living paintbrush.”

Keep your eyes on The Getty’s Exhibitions and Events page to stay informed about future events and screenings like these!