A few weeks ago, I received the most unusual, special gift: participation in KCRW art critic Edward Goldman’s Summer Fine Art of Art Collecting class. Goldman, NPR Los Angeles’ lovable Russian art aficionado for the last 26 years as host of “Art Talk,” has been hosting these seminars for quite a while – initially, as a course at OTIS, and since then, as private tours.

Mr. Goldman takes his “Art Gypsies,” a fond nickname for his faithful followers, around Los Angeles on a chartered bus to visit artist studios, private collections, museum and gallery exhibitions (where they often meet with the Curator or Director for a walk-through), and to any other place he deems worthy of attention. These Fine Art of Art Collecting classes offer a privileged glimpse behind the curtain of the LA art scene, through doors that are most often closed to the general public, but always open to him.

So, on a warm Saturday morning in Santa Monica, I met up with the Art Gypsies at Bergamot Station, and after a few words from Goldman, we were off on our art adventure.

First, we visited William Turner Gallery, to meet with Mr. Turner to talk about his current exhibition, Ed Moses: Now and Then. LA legend Moses, at 89 years old, is still churning out new works like he’s 20. Many of the works in this show are made from recycled canvases of old paintings that never left Moses’ studio, their previously painted “front side” hugging the wall, their “backside” exposed and used as the foundation for exciting new works made with mixed media. Moses certainly still has some tricks up his sleeve…

This is great news for collectors and museums alike, who have been acquiring his works since the late 50s (LACMA just closed a special exhibition featuring his drawings from the 60s and 70s), and don’t show any sign of waning interest. According to Turner, Moses is still working so swiftly that when a piece is sold from the show, the gallery sends it right home with the collector, and Moses sends another work to be hung in its place for display.

We headed over to William Sheehy’s gallery, Latin American Masters, to see unbelievably well preserved pre-Hispanic artworks from the Protoclassic period (about 100 BC to 250 AD). These works of art from Mexico, thousands of years old, predate the written word in their particular culture. Thus, these small, ancient works of art act as a didactic portal to an entire culture’s history through their every gesture, facial expression, and accessory. We were delighted to be invited to touch the surfaces of these works; an honor I have a suspicion is not extended to every visitor. 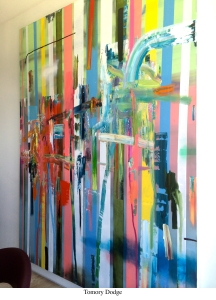 Then, the knock-out was served: Goldman arranged for us to visit the massive private collection of two old-time Art Gypsies, who I’ll call the Jones, for privacy’s sake. Their idyllic home, perched on a hillside in Malibu, overlooking the Pacific Ocean, is stuffed to the brim with artworks created by the cream of the crop of contemporary artists in Los Angeles, Cuba, and beyond. David Hockney, Robert Graham, Lita Albuquerque, Veronika Kellndorfer, Galia Linn, Alexander Calder, Ken Price, and many more coveted artists’ works find a home here. It was overwhelming and inspiring, to say the least. 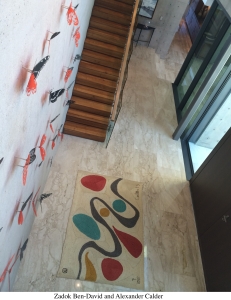 As my jaw dropped further and further toward the ground, I realized Goldman’s goal had been achieved: I had been converted to the belief that a life surrounded by art is the only life worth living. Though the Jones undoubtedly belong to the elusive “1%,” the message I received was not that money is key – to build a life surrounded by art, what is required is a true passion. Luckily, passion, I have in spades.