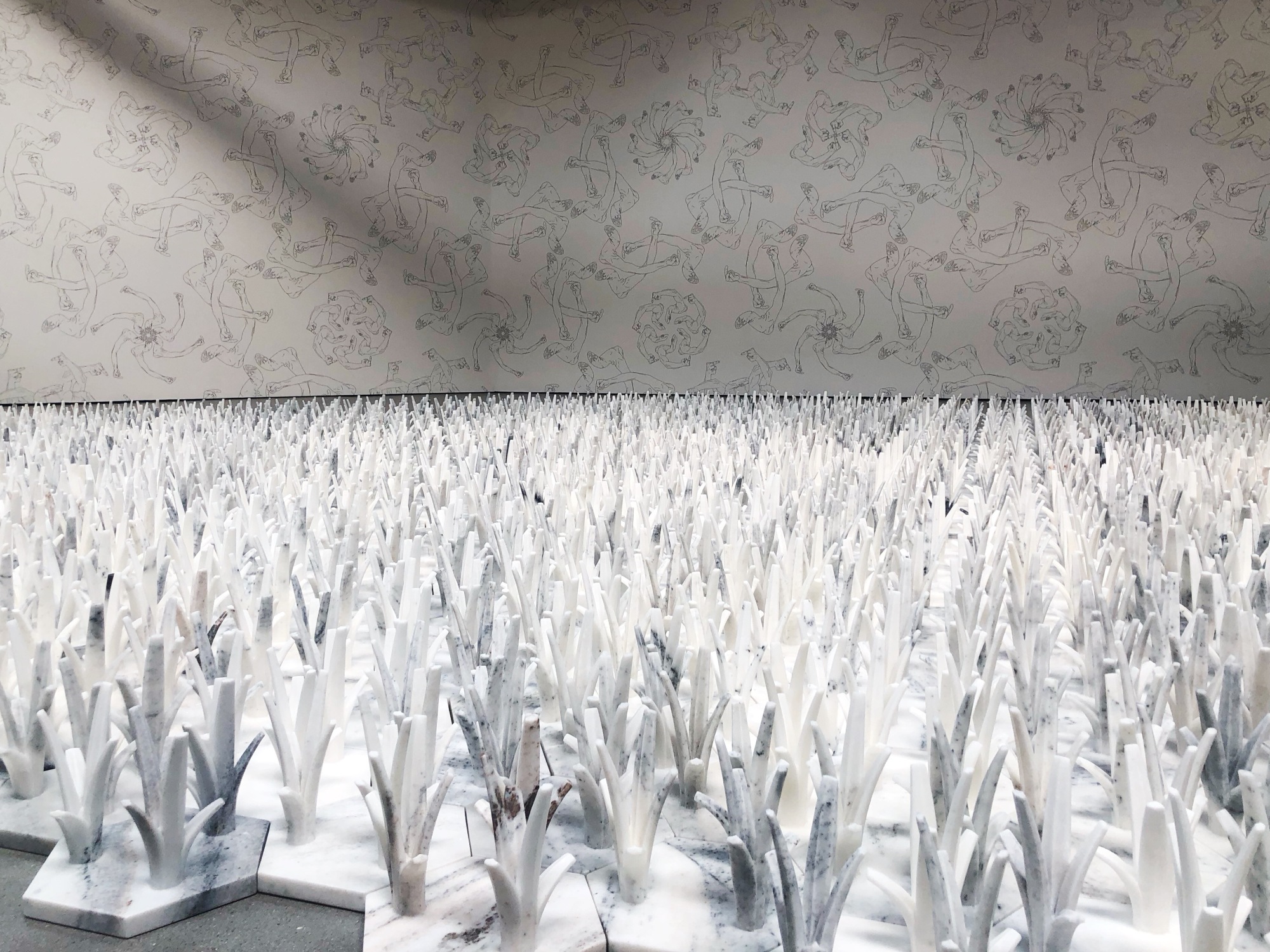 Los Angeles, a constant battleground for life and death issues like immigration and climate change, is ready for art that reflects reality – not the pop culture of entertainment. As the epicenter of the art world has moved West, LA is finally beginning to lean in to the responsibility it has to guide important conversations about inequality, oppression, and identity through fine art exhibitions.

Renowned dissident Chinese artist and social activist Ai Weiwei has been the bane of oppressive governments and the darling of blue chip institutions since the early aughts.  He blew the door off government corruption and coverups with controversial artworks and blog posts, resulting in a highly publicized arrest in 2011 that cemented his status as a household name amongst art lovers and social justice advocates.

So, it is surprising, to say the least, that a liberal art capital like Los Angeles had not had a single monographic exhibition of his work until now. In true Ai Weiwei fashion, in which repetition and multiplication are often utilized to get a single point across, this month brings not one, not two, but three major Ai Weiwei solo exhibitions to Angelenos. 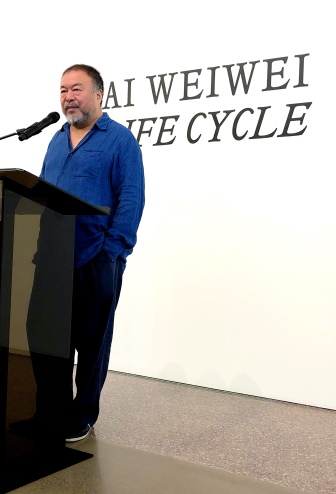 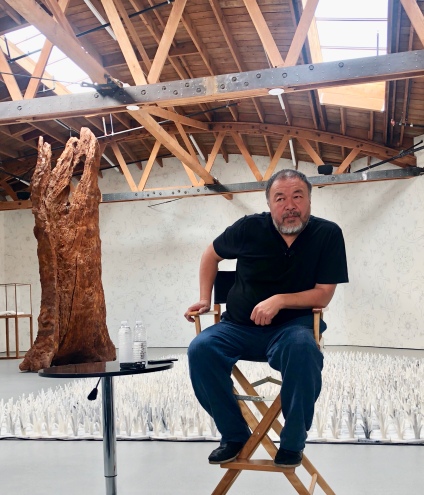 I was lucky enough to attend press previews for Ai Weiwei’s shows at Marciano Art Foundation (MAF) and UTA Artist Space, providing the opportunity to hear directly from Ai at each institution about the work presented.

A heartfelt, emotional welcome from Maurice Marciano at MAF, the first of the three Ai Weiwei openings, gave credit where credit was due. Marciano paid tribute to the late Head of UTA’s Fine Arts division Josh Roth, the young man who set in motion this Ai Weiwei wave in LA. It was a serendipitous occasion of time and place that brought about Ai’s offer to redesign an old office space in Beverly Hills that would become the UTA Artist Space. This architectural project put the wheels into motion to bring Ai’s art to LA in a fashion that could not be ignored, with three concurrent shows. Mr. Roth passed away suddenly in mid September, before he could see the fruits of his labor. He will always be remembered and thanked for this seminal moment.

This show does what Ai does best, using his Chinese roots to undo years of governmental suppression of Chinese citizens’ voices. The exhibit features three huge bodies of work: Sunflower Seeds, Spouts, and Life Cycle.

Sunflower Seeds and Spouts both use traditional Chinese material in massive quantities. When Ai’s 1,000,000 Sunflower Seeds, made of porcelain and hand painted, were first unveiled at the Tate Modern in 2010, visitors were initially allowed to walk on the seeds – before the dust created by the seeds rubbing up against each other became a health risk and walking upon them was no longer permitted. Guests were even given the option to take some seeds home (I’m green with envy)! At MAF, 49 million seeds left over from the Tate are perfectly beveled into a pile on the ground – and no, we can’t take them home.

Careful – at first, if you’re not looking closely, the seeds blend into the Theatre Gallery’s concrete floor. At the preview, a guest whose sights were on Life Cycle at the end of the gallery immediately walked right into the installation, marring the perfectly bevelled installation. Thankfully, an art handler wasn’t too far away, ready to smooth the seeds back into place.

To create Sunflower Seeds, Ai engaged hundreds of Chinese artisans to work on this project in traditional media – porcelain and painting. Contributing to this artwork is likely the only subversive action these artisans will ever take, as most Chinese citizens live in fear of retribution from the government if anyone dares to step out of line and distinguish him or herself as The Other. Still, the smallest actions by these individuals built the foundation of this large, significant work – a statement of protest broadcast around the world through social media and news outlets. 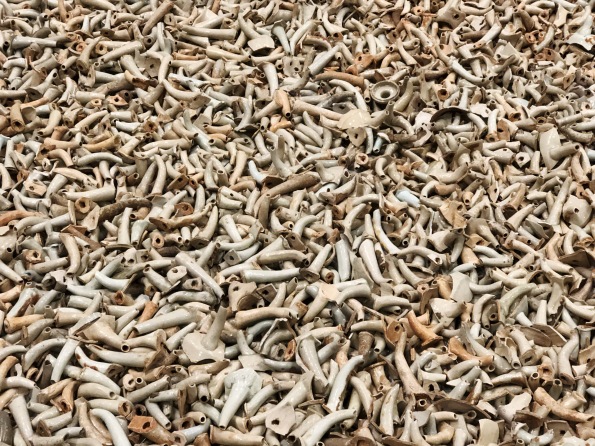 Beyond Seeds is another large installation on the floor of broken antique teapot spouts, dating back to the Song Dynasty in 960 AD. These Spouts seem to be a metaphor for the voices of Chinese citizens, silenced by the government. “How does Ai source all these materials for his works?” I couldn’t help but wonder in awe. The sheer quantity and scale of his installations are a bit overwhelming. 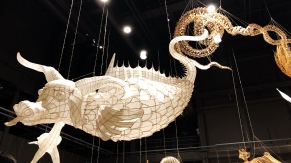 Finally, in the sunken space of the Theatre Gallery is the title work of the exhibition, Life Cycle. This work is the last that came out of Ai’s Beijing studio that was destroyed by Chinese officials earlier this year. He reveals, “They took everything. They said, ‘Don’t let him keep the ruins, because he will make art out of it.'”

This huge installation, with many sculptures made of bamboo and silk, depicts a raft with human occupants, surrounded by mythic Chinese creatures flying through the air.  This is the second iteration of a similar work initially executed in PVC rubber, referencing the makeshift rafts used by refugees to reach safety in other countries. It felt, to me, as though the mythical creatures were protecting those in the raft, ushering them to safety from the horrors of their homeland. Ai Weiwei, it occurred to me, is both a refugee and a guide to freedom… I wonder which he identifies with more. 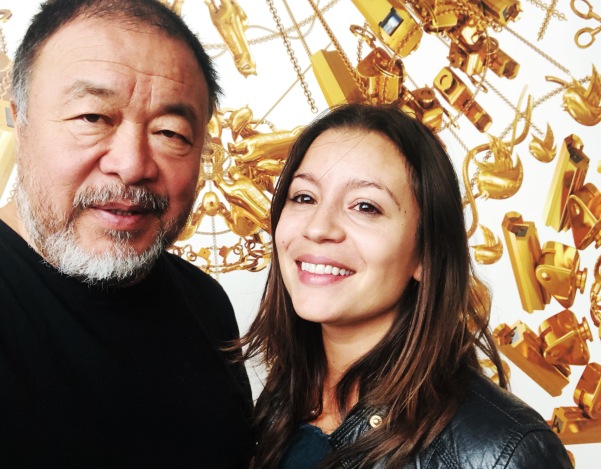 At UTA Artist Space, we have the treat of seeing Ai’s work in the only architectural space he’s designed in the United States (it’s Ai’s world, we’re just visiting it).

Wallpaper made from drawings by Ai Weiwei, including his famous middle finger 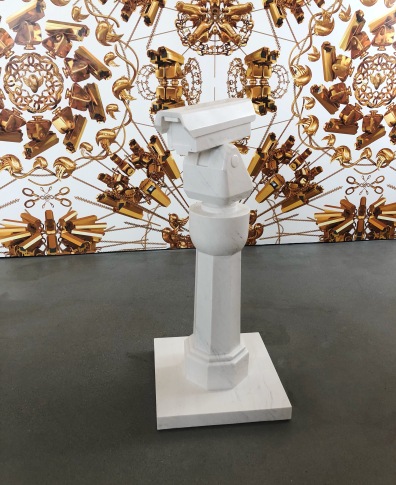 A surveillance camera rendered in marble

Here, despite the varied and beautiful artworks rendered in marble, iron, porcelain, or drawn and applied as wallpaper, the title work is quite intangible, living in the digital space.

Humanity is a collective performance project, wherein the artist invites individuals to record an except from his book Humanity, to be [potentially] posted on his Instagram, collected and played in the gallery on a loop through the duration of the exhibition. The invitation for the public to participate extends beyond the reach of the artist’s personal interactions and the gallery’s visitor count; anyone can record him or herself at home and upload the video to social media to lend their voice as a part of this performance piece.

As for Cao, the word in Chinese means “grass,” though with a slight adjustment of intonation it could also refer to an expletive. Considering we are engaging with an artist well known for photos of his own hand giving the middle finger to various significant landmarks in an effort to inspire us to question our own allegiances to government, there’s little doubt he intends for us to slip up and find we’ve suddenly become subversive, too.

Cao is a monumental sculpture, but not in the traditional sense – rather than a stories-high or negative monumental sculpture, this work sprawls out horizontally, with 727 individual grass tufts carved from marble, erect with nobility often found in human forms carved from the same medium. Each of these blades of grass maintains a dignity often attributed to the depiction of one significant figure of history. In this way, Ai continues to speak to the power and potential of the everyman.

“If we talk about a democracy, or a civil society, you have to become an individual. You have to tell the world why you care.” – Ai Weiwei

With the mid-term elections among us, Ai’s advice is more important to heed than ever. Use your voice. Use your vote. Don’t let the world change without your input.

Check out Ai’s exhibitions for yourself, and let me know — what do you think? Whatever you do, don’t let this moment pass without engaging! Art is for everyone. Take it as your own.

All Photos taken by The Art Minion

One thought on “Ai Weiwei in LA”